The term ‘fry up’ conjures all sorts of images of greasy spoon cafes offering calorie laden breakfasts with tea so strong that you can stand a spoon upright in it but this is a completely different take on this. Rather than a meat heavy breakfast this makes the best of two of my favourite things which are both in season in the UK at the moment- Jersey Royal potatoes and asparagus. Each year I eat the best part of a family’s asparagus quota to myself and I hope this year will be no exception. My tray bake ‘fry up’ is much lighter and healthier than the usual fry up but it is perfect not only as a breakfast but also as a brunch or even a midweek dinner. It’s speedy but also is low on washing up which is always a bonus in my mind! 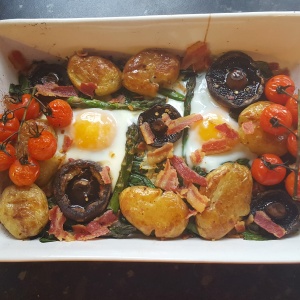 1. Start by preheating the oven to 200c/ 180fan and bringing a medium pan of water to the boil. Take the tray that you will be making the majority of the meal in, add a splash of oil and heat on the hob over a medium heat. Meanwhile simmer the potatoes until just tender; drain well. Take a separate tray, add another small glug of oil and toss the potatoes in it. Season with salt and pepper and roast until golden whilst you crack on with the rest.

2. When the oil is warm, add the onions and garlic and fry until softening. Shred the spinach and add to the tray; stir until combined with the onion and garlic and continue to cook over a lower heat until wilted. Remove from the hob whilst you assemble the rest.

3. When the potatoes are golden, use a slotted spoon to remove from the tray and use the back of a fork to lightly crush them. Add the asparagus, tomatoes, mushrooms and potatoes to the pan. Sprinkle with chilli flakes and season well. Brush the vegetables with a light coating of oil so they don’t catch in the oven and bake until just tender. Make a couple of hollows in between the vegetables and crack an egg into each; return the tray to the oven and cook until the eggs are set.

4. While that is in the oven, fry the streaky bacon in a dry pan or even wipe out the tray that you used to roast the potatoes and use this on the hob to minimise washing up further! Streaky bacon has a high fat content so you won’t need any extra oil. Fry until golden and remove from the pan. Towards the very end of cooking you have a bacon related decision to make… You can either serve the bacon on the top of the tray bake in whole rashers or you can do as I did and crumble a couple over the top whilst keeping a couple whole so it’s up to you. Serve immediately.

Tray bake ‘fry up’- just as delicious but minus the calories!