If you regularly follow this blog then you will have noticed that baking is something of a novelty as my recipes tend to be main meals however, when the festive spirit strikes, sometimes the oven needs to be cranked up and sweet treats are involved. These Christmas orange and cinnamon baked doughnuts are going to win you a lot of fans; family, friends and colleagues will be fighting over them so may I advise that you make more than you think you will need!

The recipe is simple, quick and perfect to involve children with as well. Cast your mind back a few years and, in the UK at least, something called ‘cake pops’ were all the rage; this recipe calls for you to dust down the cake pop mould and get cooking! If you don’t own one of these then you can always make these in mini muffin tins instead; they obviously won’t be the same shape but they will taste just as fabulous. These are best eaten warm from the oven but they also keep for a day or so in a dry, well sealed tin but I doubt they will last long enough for that! Feel free to dip them in melted chocolate to make them extra decadent… it is the festive season after all! 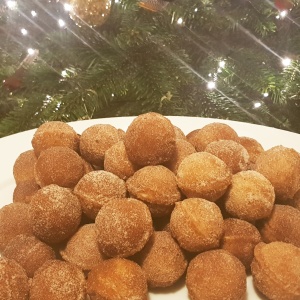 2. Take the cake pop pan and lightly grease it with oil. Use a tablespoon measure and add a tablespoon to each of the cake pop holes. Try to avoid the batter dripping over the edges and neaten it up as you go if needed to make them easier to remove from the pan later on. Repeat until all the holes are filled; secure the other half of the tray and bake for 10 minutes. Carefully remove them from the oven and set aside to cool for a few minutes.

3. Meanwhile, melt the butter in a small pan over a low heat on the hob and transfer to a small bowl. Add the caster sugar into another bowl and add cinnamon (plus the orange zest if using) to taste. Stir so the cinnamon is evenly distributed through the sugar.

4. Gently remove the doughnuts from the cake pop pan and take one at a time and dunk it in the melted butter before rolling in the cinnamon sugar. When each has been evenly coated, place on a wire rack and allow to cool slightly (if you can! They are delicious straight from the oven!). Repeat until all the doughnuts are sugared. You will now have enough doughnut batter left now to make another dozen in the tray; I  suggest rinsing the pan before re-greasing it to make sure they come out cleanly.

At this time of year I become borderline obsessive about squashes in all their beautiful guises and tend to become overexcited when new varieties come into the shops. Through the season I tend to use as many types as I can and come up with new ways to enjoy them and this recipe is no exception. The sweetness of delicate squash lends itself to being paired with the heady aromatic spices of the Middle East and all it needs is a drizzle of a simple dressing to bring it to life. Here is the recipe for the warm squash salad and it can be served either as the main meal or an accompaniment. It is delicious with pan friend lamb cutlets if you fancy.

1.Firstly I would make the za’atar mix so then it is ready and on standby for later. Simply take a small dry frying pan and toast the sesame seeds until golden and realising their flavour. Allow to cool and combine with the other ingredients; use a pestle and mortar or food processor to whizz them up and that’s all there is to it!

2. Preheat the oven to 180c/ 160 fan. Prepare the squash by peeling the skin using a speed peeler, cutting it in half lengthways and scooping out the seeds. Cut the squash into crescents and place in a deep baking tray. Peel the red onion and cut into wedges and add to the tray along with the garlic cloves (still in their papery skins).

3. Season the vegetables well. Combine the pomegranate molasses, oil and honey and drizzle over the vegetables; toss well to combine. Roast in the oven for around 15-20 minutes or until tender. While it roasts use a dry frying pan and toast the pine nuts.

4. Remove the squash from the oven and toss through the pine nuts and crumble in the feta. Sprinkle around a tablespoon of the za’atar spice mix and finish off with some freshly chopped coriander if you like. Serve immediately.